On Tuesday 22 April, I appeared as a guest at the investigative radio show Argos of the Dutch national broadcaster VPRO. I talked about the merits of our Cologne reconstruction (see previous post), what we discovered and how journalists should approach complex topics like these in the future.”

Listen to the clip and read the article here. 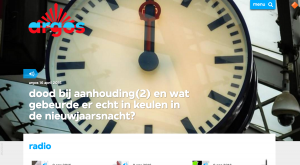 On Tuesday 22 April, I appeared as a guest at BNR Nieuwsradio, a popular private radio channel in the Netherlands. I responded to the news of the first suspect of sexual assault during New Year’s Eve in Cologne going on trial and put this into a larger context of the reconstruction of the incident. See this post.

Listen to the clip and read the article here.

Two German journalists, Katrin Ohlendorf and Yermi Brenner, wrote a three-part reconstruction of the New Year’s Eve incident in Cologne for De Correspondent. I coordinated this cross-border project from beginning to end and ensured that all facts were checked rigorously, that the authors received feedback as the project progressed and that the articles were prepped for a Dutch/Belgian readership. I was also responsible for the translation to Dutch. All in all, the three stories (excluding an op-ed written by deputy editor Karel Smouter) provided a clear overview of what is known about Cologne as of April 2016.

The four articles can be found here (Dutch):

As of 2016 I am De Correspondents’ International Editor. What does my mission entail? Read it here (English) or here (Dutch). 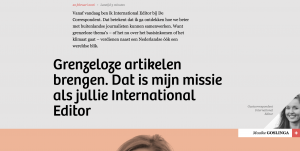 For De Correspondent I wrote an update on an interview I did back in 2014 with researcher Sven Brinkhoff, concerning starting information for criminal investigations. The reason for the update was a news article by De Volkskrant stating that the police had incorrectly judged and acted upon a piece of information it had received from the Dutch intelligence services, meaning an innocent family were jailed upon suspicion of joining ISIL. 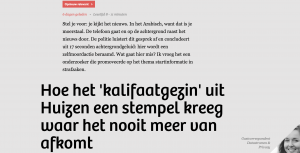